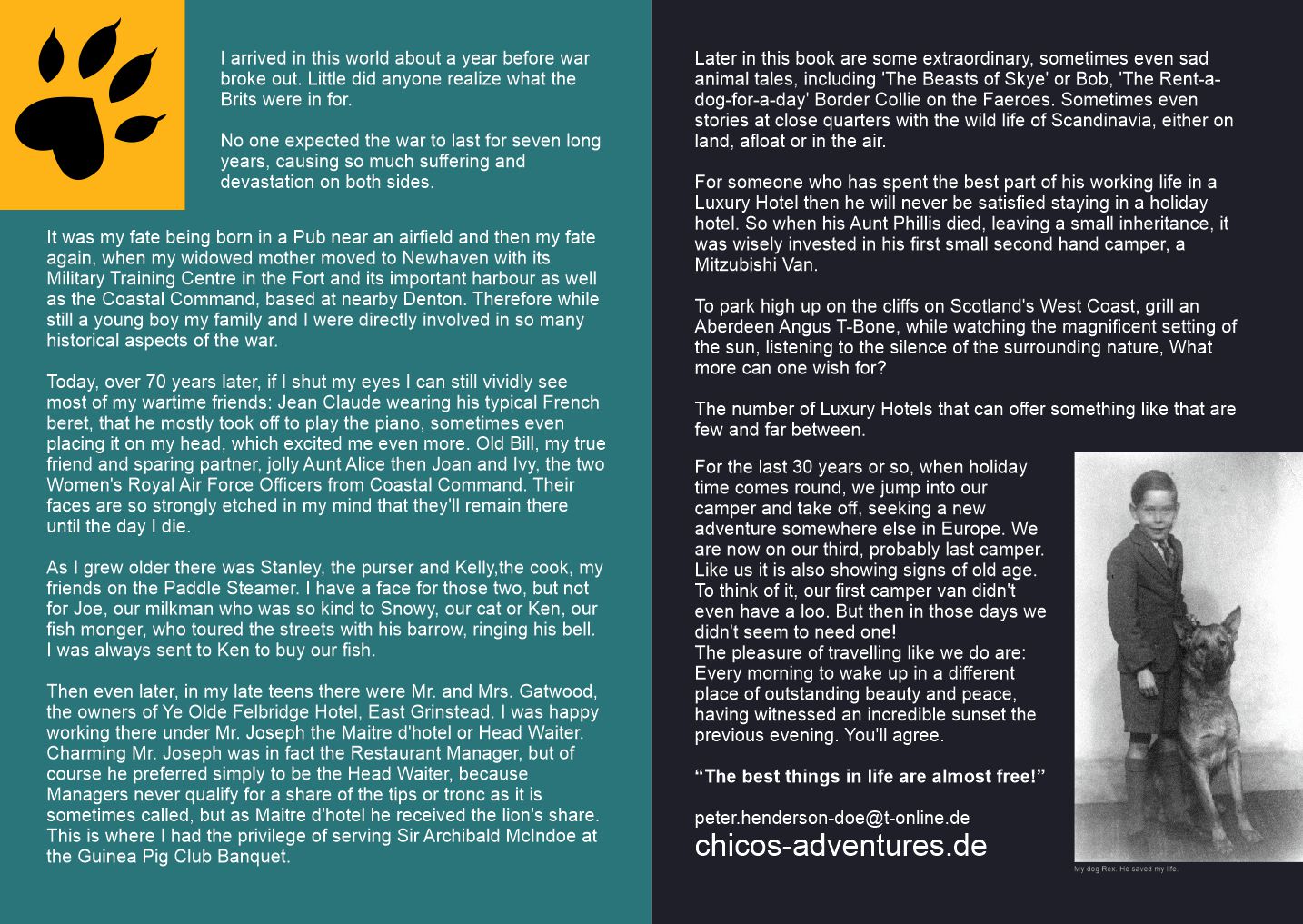 I’ve written this book in easy to understand English.  English being our family language.  It is not just for children, but for dog lovers all over the world, and the fact that my Master is a bit out of the ordinary and likes to be on the road in his camper as much as possible, enabled me to enjoy and experience a lot more adentures than my brothers and sisters could ever dream of.

From the very first day when Anthony left me, sitting in the car with Master, I knew he had gone.
I just sat there and howled and howled. I was so unhappy. Master did nothing, he just sat there, too.

Then suddenly, he started to howl with me and for a long time we both howled together.

That was when we had our first chat and I knew he would always look after  me and protect me. When I’m out with him on the lead, he is always talking to me, saying sometimes stupid things. But when I can hear his voice, I know, that everything is okay.

Sometimes when I get tired I just lie down in the grass and he lies down beside me to have one of our little chats. He just seems to know exactly what I’m thinking about. So that is how this book came into being.Of course, I can’t hold a pencil in my paw, so master had written it down for me.
This is an unusual, but true story about my life and my dreams. 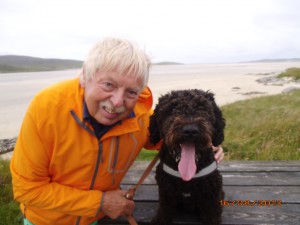 Peter Henderson-Doe has always been connected with the Gastronomie.
His last job in the UK was as F & B Manager at the Randolph Hotel in Oxford.
He has worked and travelled widely in UK and Europe, including stints in
Scotland, Ireland, Austria, Italy and France as well as two years with Seiler
Hotels in Zermatt, Switzerland, where his love for the mountains became an
important factor in his life. Back again in England, but he couldn’t settle, so
1972 saw him back on the Continent to be near the mountains he loved.

This time a management position for a well known Swiss Gastronome in
Munich just in time for the Olympic Games. However, he couldn’t run fast
enough. The German girls were faster, so he stayed, this time adding another
string to his bow – Squash Trainer –

Life is full of “ups and downs” and you never know what is round the next corner.
In Stuttgart he ran a noble English Night Club which helped him, as a single
parent, to take care of his two children for some time until he met Ursula, his 2nd wife.
At last he had somebody to share his “ups and downs” with. Finally in the eighties he
saw sense and became a teacher, teaching gastronomie subjects and English.

He has had a few, but not very successful attempts, as a hobby freelance journalist
writing for American Paragliding and Skiing Magazines. But he can’t be sure they
were ever published. In the eighties he was a pioneer at the start of Paragliding
and considers that he is lucky to have survived. He finally stopped four years ago.
Once again – he couldn’t run fast enough. This sport gave him some incredibly
beautiful bird’s eye views from Nepal to Norway and on the way he met up with
a great bunch of extroverts. God bless you guys. Especially Miro and Hans-Peter.

Some might say that he has a tick about “fringe sports”. Since 2008 he has been
an ardent and active supporter of Racketlon, the ‘Iron Man of Racquet Sports’
and travels to the European Tournaments with Chico, his personal trainer, in
his chauffeur driven camper.

Regretably, he didn’t take up golf until in his mid-forties when he was working
in Scotland and Ireland. In spite of his limited financial means he has still managed
to play many of the world’s top courses.

Some of his more successful retired friends are now driving Z 3’s or red Alfa Spiders,
but he has remained true to his student days and is more than happy, when he is
sitting up high and buzzing around the countryside on his new red scooter.

Sit down, relax and join Chico in his everyday, carefree canine world.

In Chico’s world everything is still okay. He doesn’t watch TV.
So he doesn’t experience the Struggles for Power, the Greed of

Big Business’, the Violence and the unnecessary Killing.

If Chico meets a friendly stranger, he knows and feels at once
if this person likes dogs. He will spend some time with them
and when leaving say goodbye in the proper fashion, by giving
his paw. It doesn’t worry him at all, what this stranger’s Race,
Religion or Sexual Preference is, or how they are dressed. 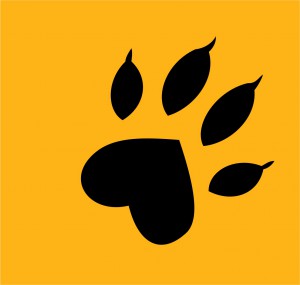 You may have noticed that the pad in the middle of Chico’s paw print has the shape of a heart. This is no co-incidence.

Chico always  has his heart in the right place and this logohas been specially designed for him.

This book is not for you if you are not an animal person.

In order to enjoy this book it is important that the reader has an affiliation and affection for animals.
Chico’s Adventures is not an inexpensive book, but it is, in it’s way a unique book.

How to read this book:

This is not the sort of book one reads from cover to cover.
Of course, you can. But it is better to start at the beginning

to find out who Chico is, then select a chapter or two at random.

Curl up on your sofa with a  cup of tea or even a
single malt, with your own canine friend nearby,
then take your time reading it and let it slowly
sink in.